SINCE 1949, THE BIBLE OF NORTH COUNTRY TRAVEL

Visitor Information: Carcross Visitor Reception Center is part of a complex of small buildings called the Carcross Commons. The colorful crests on the fronts of these buildings are representative of First Nations’ clans. The centre is painted with the “Welcome Man” crest and is operated by Tourism Yukon. Open daily May 1 to Sept. 30, 8 a.m.–8 p.m. 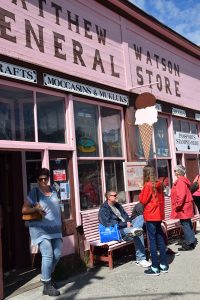 Carcross is located 44 miles/71 km south-southeast of Whitehorse and 65 miles north of Skagway, AK, on the South Klondike Highway.

Originally known as Caribou Crossing, because of the large number of caribou that traversed the narrows here between Bennett and Nares lakes, Carcross became a stopping place for gold stampeders during the Klondike Gold Rush. It was a major stop on the White Pass & Yukon Route Railroad  from 1900 until 1982, when the railroad ceased through train service to Whitehorse. In the early days, passengers and freight transferred from rail to sternwheelers at Carcross.

Camping is available at Carcross Tagish First Nation’s Carcross Campground, located near the airstrip. Camping is also available south of town at Conrad Yukon government campground. Montana Services, on the highway, has a food store, RV Park, restaurant and gas/diesel.

The little steam locomotive, Duchess, is on display near the White Pass & Yukon Route depot. 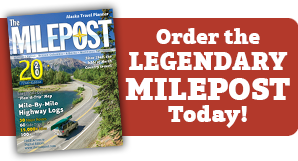